For several years I worked at the Janelia Research Campus in Ashburn, VA which is run by the Howard Hughes Medical Institute. The facility is dedicated to Neuroscience Research.

Neuroscience is an interesting field because it’s highly interdisciplinary. At Janelia there were scientists and engineers whose training was in Mathematics, Physics, Chemistry, Biology, Computer Science, Electrical Engineering, even Cosmology in one case. 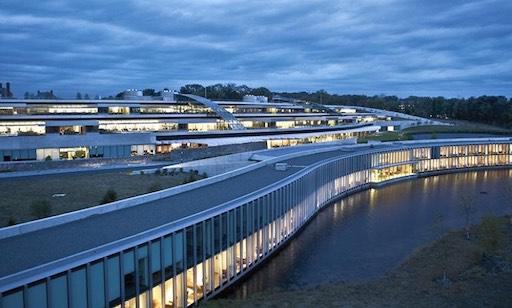 The lush Landscape Building at Janelia where I worked is visible behind their own private hotel.

I primarily worked on a tool called Raveler as a graphics programmer. I did not really need to understand very much of the science, although it was very much in the air and I went to many science talks. The tool was used in-house to inspect and correct the automatically generated “segmentation” of electron microscope images. The images in this case were of the brain tissue of fruit fly. The goal was to create the “connectome” or “wiring diagram” of the fly’s neurons.

When I joined Janelia Raveler could only view images smaller than around 6,000 x 6,000 pixels. I adding a tiled image viewer to Raveler that used an approach similar to Google Maps. In the end we were able to browse stacks of images thousands deep each larger than 50,000 x 50,000 pixels. That meant you could interactively browse over a terabyte of total imagery, and this was in 2010.

The Raveler interface for "proofreading" segmentations.

Tiled image viewers are a staple on websites and in many graphics applications because they more or less have to work perfectly. You can navigate images of basically any size with a steady 60Hz update rate if you implement it well.

I wrote the tile viewing code in Python using OpenGL. The performance was impressive because Python is considered a fairly slow language. However in this case we only needed to do a certain amount of work in Python before handing things off to the OpenGL API which used C++ under the hood. And then the graphics card itself did the lion’s share of the work. This was great for me because Python is easier and more pleasant to develop with compared to C++. 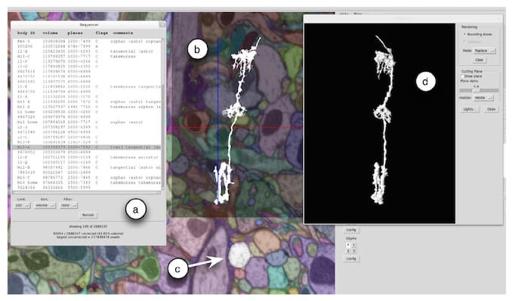 My 2D and 3D visualizations of a reconstructed neuron.

Later in the project I added some 2D and 3D visualizations of the reconstructed neurons to give users insight into shapes they were creating. The users of Raveler worked in the same building and it was gratifying to see in-person how the improvements that we made to the software were making their lives easier and their work more productive.

One fun thing about working at Janelia was they had a huge 4,000 core computer system in the basement with seemingly limitless disk space. I was able to kick off jobs on this whenever I wanted to. There was some sort of in-house accounting system so your group did “pay” for usage, but I imagine it was very cheap compared to a cloud provider, since it was fully paid for and literally in the building.